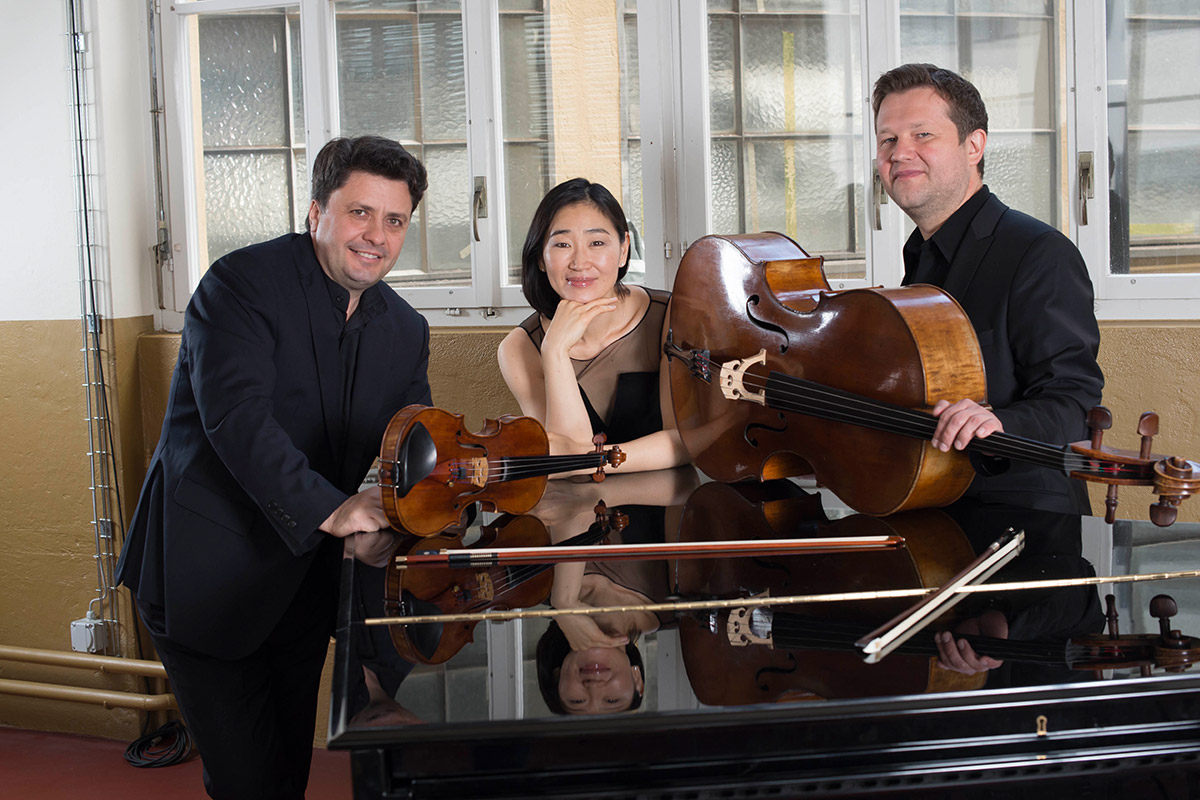 The AOIDE Trio, founded in 2016, already fascinated the press and the audience at its debut in Zurich. With the AOIDE Trio, the internationally renowned musicians have created their own musical home and feel constantly inspired in their collaboration. Their thrilling interpretations not only demonstrate their highly sophisticated technical level, but also immerse listeners in a world of the most diverse emotions.

Concert tours, courses and teaching activities at various institutions are further activities of the members of the AOIDE Trio. The concertmaster of the Tonhalle Orchestra Zurich, Klaidi Sahatçi and Sasha Neustroev, deputy solo cellist in the same orchestra, are long-standing musical partners who, together with the pianist Seung-Yeun Huh, form an ensemble that is international in the truest sense of the word.

The three musical personalities bring a wealth of global experience on international stages as soloists and chamber musicians, making the AOIDE Trio a unique sounding body.

Born in Seoul, Korea, studied in Germany, England and the USA. She won several prizes at international competitions and has been performing concerts in the USA, Asia and several different European countries.

She regularly collaborates with conductors such as David Zinman, Adam Fischer, Peter Kuhn, Marcus Bosch, Pietari Inkinen and Wolfram Christ and performs with orchestras such as the Baltimore Symphony Orchestra, the Austrian-Hungarian Haydn Philharmonic, the Bielefeld Philharmonic, the Philharmonisches Staatsorchester Halle, the Kurpfälzisches Kammerorchester, camerata Zürich and Sejong Soloists. In addition to her solo activities, Seung-Yeun Huh is also a sought-after chamber musician. Founded in 1996, the “Huh Trio” (with two of her sisters) celebrates its 20th anniversary in 2016. In addition, she regularly performs in various chamber music formations.

After the successful recording of the complete piano sonatas and piano pieces by W. A. Mozart on five CDs with the label ARS MUSICI, the three volumes “Années de Pèlerinage” by Franz Liszt were released on two CDs in collaboration with the German Broadcasting Radio and ARS MUSICI. In 2012 she recorded the two late piano sonatas by Franz Schubert for ACUSTICA RECORDS and in the following year the recording of the Huh Trio. Also Seung-Yeun Huh recorded chamber music works and Schumann’s solo piano works on Swiss Radio (SRF).

In addition to her concert activities, Seung-Yeun Huh is a diplomate cultural manager and Music director at the Festival KlusClassics. Also she works as a prorector at the Zurich Conservatory of Music.

Born in Tirana, studied at the conservatory G. Verdi in Milan, where he received his soloist diploma under the direction of Gigino Maestri in 1994 with the highest distinction and honorable mention.

Klaidi Sahatçi made his highly acclaimed solo debut in Milan with the Radio Televisione Italiana Symphony Orchestra and the Guido Cantelli Orchestra. This was followed by solo appearances with the Orchestra della Svizzera Italiana, the Virtuosi Italiani, the Cameristi della Scala, the Zurich Chamber Orchestra, Orchestre National de Lyon and the Orquesta Nacional de Chile. Klaidi Sahatçi regularly collaborates with world-famous musicians such as Rafael Oleg, Julian Rachlin, Bruno Canino, Bruno Giuranna, Dmitry Sitkovetsky, François-Frederic Guy and Yuja Wang. He appears regularly in many important halls such as the Great Hall of the Tonhalle Zurich, the Teatro alla Scala Milano, the Salle Gaveau in Paris and is a guest at renowned festivals. CD and radio recordings complement his artistic activities. From 2004 to 2008 he was first concertmaster with the Zurich Chamber Orchestra, from 2007 to 2009 first concertmaster with the Orchestra of the Teatro alla Scala in Milan, and since 2009 first concertmaster with the Tonhalle Orchestra Zurich.

Klaidi Sahatçi is professor at the Conservatorio della Svizzera Italiana in Lugano and plays a violin “Wieniawski, Bower” by Antonio Stradivari from 1719, provided by Mercedes-Benz Automobil AG, Zurich.

Born in Russia, studied with the internationally renowned cellist David Geringas. In 1997 he was awarded “Best Russian Cellist” at the Rostropovich Competition in Paris. One year later he received a diploma at the Tchaikovsky Competition. In 2001 Sasha Neustroev won first prize at the 4th International Australasian Adam Cello Festival & Competition in New Zealand as well as a special prize for the best interpretation of Piazzolla’s Le Grand Tango.

In March 2002 Sasha Neustroev performed as soloist with the Tonhalle Orchestra Zurich under the direction of Lorin Maazel and in 2003 he toured with the New Zealand Symphony Orchestra. Further concerts took him throughout Europe and Asia, where he performed brilliantly as a soloist and chamber musician. His CD recordings as well as television and radio recordings document his passion for music.

Since September 1999 Sasha Neustroev has been deputy solo cellist with the Tonhalle Orchestra Zurich.