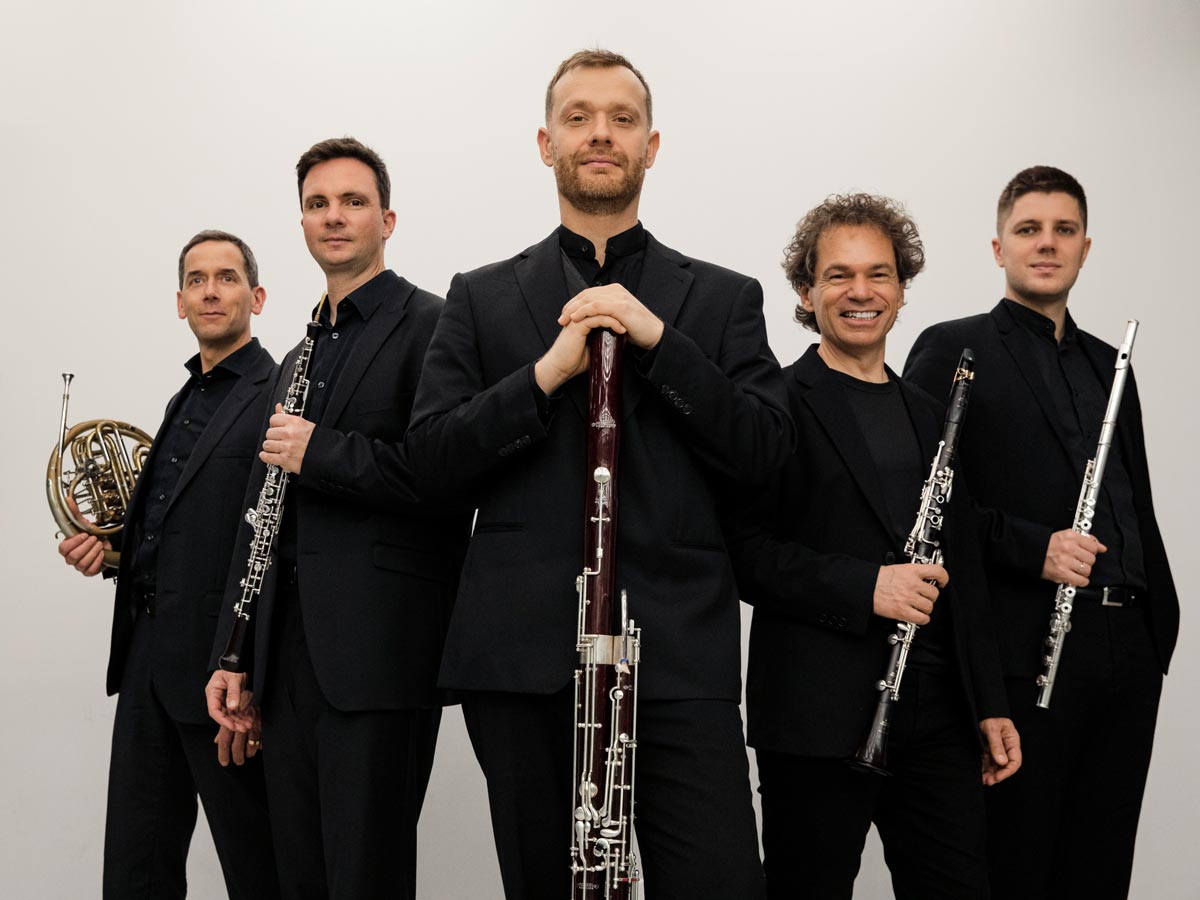 The wind quintet SWISS 5 was formed in 2020 from five top-class musicians. All artists are active on international stages and have been recognized experts in their field for years. Their joint interplay brings out these qualities to best advantage in this form of chamber music. Audiences are thrilled by the SWISS 5 Wind Quintet’s stirring interpretations, great energy and sensitive musicality.

Matvey Demin belongs to the most promising artists of his generation. Born in Siberia, Russia in 1993, Matvey started to study flute with his grandmother, continuing his education in Hannover and Munich with Prof. Andrea Lieberknecht.

Since the age of 20 Matvey holds a position of Co-Principal Solo flute in the Tonhalle Orchestra Zurich, where he works under the baton of Paavo Järvi, David Zinman, Bernhard Haitink and many other conductors.

Matvey has appeared as a soloist with Tonhalle Orchestra Zurich, Mariinsky Orchestra, Düsseldorf Symphony Orchestra and many others. In summer 2019 he performed in Japan with PMF Orchestra under the baton of Maestro Valery Gergiev.

Martin Frutiger was born in Bern. During his school days he already studied with Professor Hans Elhorst at the Bern University of the Arts. He continued his oboe studies at the University of Music and Performing Arts Munich in the master class of Professor Günther Passin. From 2001 to 2003 he was a scholarship holder in the Orchester-Akademie of the Berliner Philharmoniker. Since 2004 he has been principal cor anglais player with the Tonhalle Orchestra Zurich. At the same time he was appointed professor of cor anglais and oboe d’amore at the Zurich University of the Arts. Since 2015 Martin Frutiger is professor of oboe at the Lucerne University of Applied Sciences and Arts.

Martin Frutiger has won several competitions including first prize in the International Oboe Competition of the Handel Festival in Halle on the Saale and also first prize at the “Concours National d’Execution Musicale” in Riddes, Switzerland. In 2003 he was awarded second prize in the International Sony Competition in Tokyo. In the same year he was also a finalist in the “New Talent” competition of the European Broadcasting Union in Bratislava.

Martin Frutiger is the artistic director for oboe of «The Muri Competition» in Muri, Switzerland.

Fabio Di Càsola, only 23 years old, wins first prize at the CIEM (Concours international d’exécution musicale), the extremely prestigious music competition in Geneva in 1990 – 18 years have passed since the last time a clarinettist received this award. This was followed by invitations to important international festivals, such as the Berlin Festival conducted by Claudio Abbado, the Evian Festival conducted by Mstislav Rostropovich and to Lockenhaus to meet Gidon Kremer. He wins other prizes such as the “Grand Prix Patek Philippe”, the “Prix Suisse” for contemporary music and the International Competition for Contemporary Music in Stresa. In 1998 he is elected “Swiss Musician of the Year” by the jury and the audience in Geneva.

After a performance of Mozart’s Clarinet Concerto at the Tonhalle Zurich, SONY decides to release his recordings. Two chamber music CDs are followed in 2009 by an orchestral CD with the clarinet concertos of C.M. v. Weber, which is immediately awarded the ‘Editor’s Choice’ of the renowned Gramophone magazine. The following CD with the Mozart Clarinet Concerto also received many good reviews in the press. Fabio Di Càsola performs as a soloist with orchestras such as Musikkollegium Winterthur, Russian National Orchestra, Prague Chamber Orchestra, Orchestre de la Suisse Romande, Orchestra delle Svizzera Italiana, Lucerne Festival Strings, Camerata Zürich and many others.

Fabio Di Càsola is a member and co-founder of the “Ensemble Kandinsky” with Andreas Janke, Thomas Grossenbacher and Benjamin Engeli.

He is professor for clarinet and chamber music at the Zurich University of the Arts and artistic director of the chamber music festival “Klang-Musiktage auf Schloss Meggenhorn”, founded in 2006.

Matthias Rácz began his first musical training during his school days in Berlin. At the musical Carl-Philipp-Emanuel-Bach-Gymnasium he had the opportunity to study with Fritz Finsch, in these days professor for bassoon at the Conservatory Hanns Eisler. After graduation and numerous first prizes at the federal competition ‘Jugend musiziert’, he continued his studies with Prof. Dag Jensen at the University of Music and Theatre in Hanover and received various grants, such as scholarships by the ‘Jürgen Ponto Foundation’, the ‘Villa Musica’, the ‘PE Promotion for Students of Music’ and the ‘Study Foundation of the German people’. At the International Bayreuth Music Competition ‘Pacem in Terris’ in 2000 he received the 3rd prize in the overall ranking of all woodwind instruments. In 2002, the 1st prize at the International Music Betting competition “Prague Spring” followed and the same year he won also the International ARD Music Competition in Munich.

Matthias Rácz made his debut as a soloist at the age of 15 with the Cologne Chamber Orchestra in the German television production “Young Artists on the podium”. Until today numerous concerts as soloist with renowned orchestras followed, among these the Symphonieorchester des Bayerischen Rundfunks, the Deutsches Symphonie-Orchester Berlin, the Tonhalle Orchestra Zurich, the Orchestra della Svizzera Italiana, the Stuttgart Chamber Orchestra and the Ensemble Resonanz. As soloist with various ensembles and as well for solo recitals he was guest soloist at many important music festivals such as the Rheingau Music Festival, the Schleswig Holstein Music Festival, the Mozart Festival Schwetzingen and the Festspiele Mecklenburg-Vorpommern.

His CD productions – including the Northwest German Philharmonic Orchestra and the major bassoon concertos by Mozart, Hummel and Weber and most recently with the Stuttgart Chamber Orchestra and mainly French works for bassoon and small orchestra (both under the baton of Johannes Klumpp) – document his work, as well as the recordings of various TV- and radio broadcasters.

Since the start of his career Matthias Rácz is highly engaged in the advancement of young talents. Despite his young age, he was invited in 2003 by Maestro Seiji Ozawa to Japan as a lecturer to his academy project ‘Ongaku-juku Opera’. Since then numerous master classes are leading him around the globe. Moreover he is artistic director for bassoon at ‘The Muri Competition’ in Switzerland and holds the chair for bassoon at the Zurich University of the Arts.

At 21, he was already principal bassoonist of the Gürzenich Orchestra Cologne. Since 2003 he is in the same position in the Zurich Tonhalle Orchestra and in the Lucerne Festival Orchestra under Riccardo Chailly.

Mischa Greull, born in Basel, has been principal horn in the Tonhalle Orchestra Zurich since 1993. His musical studies took him from Bern via Winterthur to Germany, where he also found his first position in an orchestra. As a principal horn Mischa Greull has been engaged by various orchestras for different projects, such as the Bavarian Radio Symphony Orchestra, the Munich Philharmonic Orchestra, the Orchestre de Chambre de Lausanne, the Malaysian Philharmonic Orchestra and others.

Known for his expressive and mellow sound, Mischa Greull prefers to play works originally composed for the valveless natural horn, which therefore present a special tonal challenge to the performer. Important chamber music and solo works for horn were also composed in the transitional period (end of the 19th century) from the natural to the valved horn. These include the Horn Trio by Johannes Brahms, the Duo Adagio and Allegro by Robert Schumann and the Larghetto by Emmanuel Chabrier for horn and orchestra.

Since his studies at the Bern Conservatory and the Schola Cantorum Basiliensis, Mischa Greull has been exploring the playing techniques of natural and valve horn.

Chamber music by Haydn and Schubert played on original instruments and also orchestral works, especially the cycle with all Beethoven’s symphonies in 2014 with the Tonhalle Orchestra conducted by David Zinman are important examples.

Numerous chamber concerts on international stages with a wide variety of instrumentations from Brahm’s Trio to Mozart’s Gran Partita characterize his musical career. A close collaboration connects him with the Swiss Octet, the SWISS 5 and his horn trio with violinist Andreas Janke and pianist Seung-Yeun Huh. With the latter, a CD with works by Brahms, Schumann, Beethoven and Widmann was released in 2017.

Mischa Greull is professor at the Zurich University of the Arts, where he teaches a horn class and chambermusic. In additional, he gives master classes in Europe, the USA, Canada and Asia.